My friend put out a rather desperate plea during the week for a Steiner doll for her son. he had spent the afternoon playing with a doll named Nelson, he fell in love and wanted one of his very own. Now Bec is a busy woman, working, studying, mothering...and while technically she could make a doll time is slipping through her fingers.

As it happends I am making my big girl a newborn sized doll for Christmas. Last week i went to join the head to the newly completed body and....well, the head was too small! wayyyyy too small like 8cm circumference too small; it was VERY distressing. But what is a mother to do? i made another head, much larger, much more newborn sized and so I had a spare head.

Any of you who have made a doll knowns that the head is the most complex and time consuming bit... this morning I packed up my brown eyed head, a pattern and enought fabric for the body into a snap lock bag.

On Monday morning he is on hs way to the south coast...I wonder what his name will be? 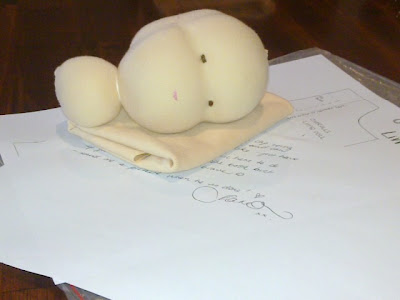 This week I have also been the recipient of a act of kindness. I dropped into a new friend's home the other day to get a little piece of candle wick. She has been doing some work in her garden and I noticed a freshly planted rosemary bush. I told her I have heard that a big rosmary bush is supposed to signal that a strong woman lives in the house "what kind of strong? masculine strength?" she enquired "No, i don't think so. I think a woman with strength of character, a woman who can be relied upon, faithful, determined...that kind of thing" was my response.

She said she wondered because she had three sons and someone said that meant she wasn't in touch with her feminine side...hmmm I don't know about that. Anyway I have gone off on a tangent. She has three sons but I noticed a broken old wicker pram in the garage as we walked through, i asked if she intended to fix it for one of them. "No, that is my sister's and her daughters are teenagers now". Maybe I looked a little too long...maybe she is very insightful. I had wanted to buy one for the wee girl for Christmas but just could not justify the price because her big sister is perfectly happy to let her have her old one..it is pink and metal...we found in on the side of the road once...it is very 1970's ~ I told her all that too.

When I got home she rang, she had spoken to her sister who was delighted for it to go to a new home to be loved and played with all over again! and she didn't want anything for it. So generous, i have never even met her sister! 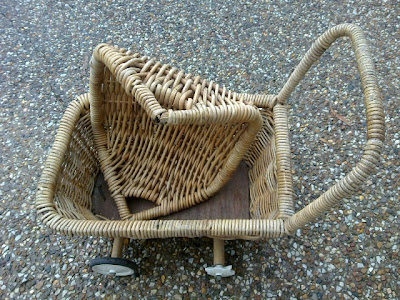 Here it is... My beloved will repair it and then I will wash it and make some lavender beeswax to restore the colour. A little mattress made from recycled cloth nappies and a little quilt from my fabric stash, it will be so beautiful and a perfect size for her. We are so lucky!

I would also like to take this opportunity to thank you all for your kinds words and thoughts after Bob's death. My beloved has written a short eulogy to his friend to read at his funeral on Tuesday.
I will share a little with you now~

"The very nature of becoming wise means making mistakes, fortunately for me, I met Bob after he had made many of his mistakes; so I met a wise man, a compassionate man, a fiercely loyal man, and a man who truly believed that family is central to life.
I once asked Bob what he'd like to be remembered for and he said, after a little pause, 'for doing what I said I would'....and that for me sums up what I admired most about Bob - he was a go getter but also very humble. I will miss him terribly..."
Posted by S at 1:52 PM

I love you so very very much you beautiful beautiful soul. XXXX

Shannon, how fortunate of you to have that beautiful little pram, we don't see them as beautiful as those these days. Some little boy will be delighted with the wonderful gift you have given. I have made a couple of dolls for my little boys, they do prefer their teddies those but they play with them as if they were their babies which is beautiful to watch. Isn't it wonderful that when we give we always get something special back.