I couldn't belive my eyes last night when I saw the news of flash flooding in Toowoomba ~ I have many dear friends who live there, I have been their midwife and cradled their babies as they were born. The images and video are devestating.
All my friends are ok, not so their houses and cars. Yesterday seven people from the town died in torrents of water and over 50 people are still missing. Please spare a thought for them today.
This picture from ABC news www.abc.net.au/ is of Toowooba's main street. If you follow this link you can view terrifying video of cars being hurled down streets and a man clinging for his life to a tree as a van crashes into it ~ thankfully he was ok and was rescued, you can view that video too. 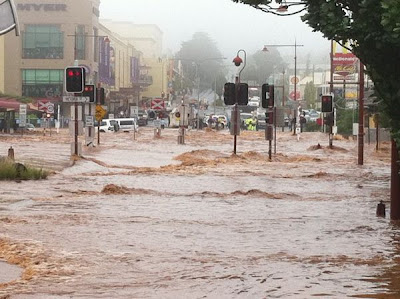 The water is now heading toward Brisbane and our city's main dam flood gates are all open ~ the dam was built after the 1974 floods when the city went under water...testing time. 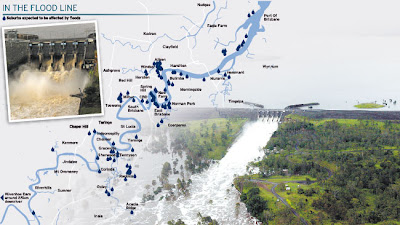 *Update...at about 1pm local time the Brisbane river burst its banks and an evacuation was called for the entire CBD. My beloved is home safely...probably rode on the last train out of there, the rail lines are going under!

Oh my love That looks awful..nature is so powerful and ruthless.. it's just amazing how brave,kind and tough people turn out to be.
We're thinking of you all and sending our best.
That rescue was amazing.Those men very brave.
Stay as safe as you can.

We're normally so sheltered here in brisbane, it really does make you open your eyes and appreciate the raw power that the earth can unleash. I am typing this from my office, which is currently 15 metres from the rising brisbane river in Westend! Hope you and your family are on high ground.
xB

I've been hearing about this on the radio...life is just so fragile on this planet of ours. I hope your friends are all safe.
I'm glad that you shared this with us, because it just so helps when events like these have a human face, (and aren't just a story on the radio)...I think we can forget sometimes that these events touch people just like us, and any of us could be in those shoes if Mother Nature decides it so.

Loads of love to you
xo maureen

Praying for you and your family and those you know. Its seems so far away from us (in Maryland, US) but you bring it close.