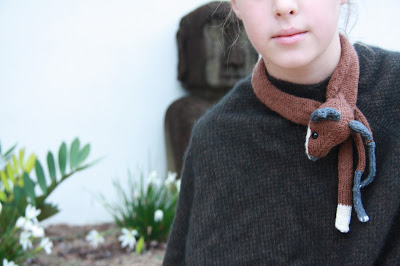 They went to a Fair, and they all won prizes –
Tree plum-puddingses and three mince-pieses.
They rode on elephants and swang on swingses,
And hit three coconuts at coconut shieses. 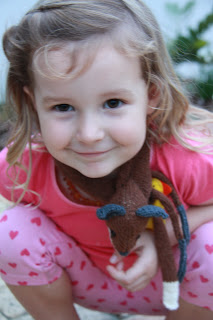 I've been knitting again. This time for Mrs Bloom who lives in a place where she really doesn't need such things but well.... it is cute, yes?

The pattern is the mini fox stole from the highly talented and whimsical Tiny Owl Knits
Posted by S at 8:17 PM

Phooey. I just commented, but it was followed by a sketchy cyber-moment, so I'm not sure it got through. It went something like this:

Aaaack! ADORABLE!!!! Both the models and the foxy scarf. Fun and charming.

thank goodness my kids didn't see this! It is super adorable.