and he gave me a ring to seal the deal... the ring had five sparkling diamonds and was the prettiest thing I'd ever owned.
A resonable time ago - some say four years - one of the diamonds fell out. Being a sentimental gal I didn't really want to just get another diamond to put back in the hole; it just wouldn't be the same... I suggested a redesign, nothing too fancy but.. being a sentimental guy he liked the old ring and he didn't want to change it.
So the sad little ring sat in a box, nobody wore it because it looked a bit tatty with a gem missing and it sat, and it sat.
It got talked about loads - lots of friends were asked what they thought; should it be redesigned into something more fitting to the grown up woman wearing it now, or should another little diamond be sought to put in the hole and keep it as it was given, when she was 19?
Boys always took his side, girls mine...and the ring sat waiting.
Then one day, not so long ago, I read an article in a new local magazine called Peppermint. The story was about a man called Ben. Ben has a sustainable jewellery business called Utopian Creations; all his jewellery is made using eco-friendly techniques from 99-100% recycled and sustainable materials in fair trade conditions - people, planet and animal friendly. I sent Ben an email (I cc's my beloved in).
We chatted back and forth, he knew how important it was to me to keep the elements of my engagment ring - the gold, the diamonds - so even tho the design was new the ring itself was not.
I added a ruby - my wee girl's birthstone. Her big sister has an inheritance of my 'eternity ring' which was given to me after she was born so we wanted to make this one for the wee one. But because it is my engament ring we held one of the diamonds back from the final design, and with the little bit of gold that was left over in the redesigning Ben made a small pendant - so the big girl can have that... can't have any squabbling!
My husband is very happy and I just love it, what do you think? 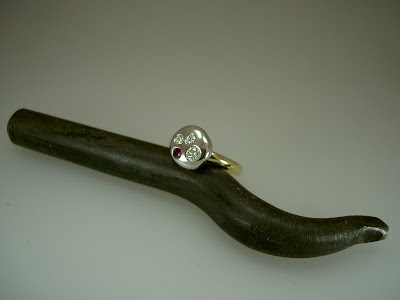 Absolutely STUNNING!!!
Oh, I love this idea and new design so very much it seems so fitting to have something new like this as your family and relationship grows! Most of all I love how unique it is, I am very picky about jewelry so I am smiling to myself that I have so much to say! What a great company! Congratulations : )

Oh thank you gardenmama, it is wonderful, i am very pleased.
I keep looking at my washing line and am trying to find an angle that will look..umm not so aussie back yard.. i think it is not working because my weekly rhythms don't usually allow for wash wednesday and thursday just doesn't seem to cut it!

Wow, that is SO cool! You are a lucky gal! xx

lubberly. I would like to see it on your finger tho. :-)

How cool! I love that the old ring wasn't replaced, it just transformed. Beautiful story and the ring is AMAZING! So unique and perfect!!