I just don't know where to start, thought I would just post a few pictures but I have over 450! yikes.

We had a wonderful, wonderful time. There was purpose in our visit other than sitting in the sun; which took about 21 hours each way (12 hours of flying and the rest in transfers and delays! x 2. You really do lose whole days in airports) and that was to catch up with our dear friends, aka the 'Spares' (our proteges should they need to step in and parent our girls) they live in Seattle now so we haven't seen them in about 3 years and they were yet to meet the wee girl outside Skype.

So a week in Maui with the Spares - we laughed, lounged, snorkled with sea turtles and colourful tropical fish I had only ever seen in picture books and the www, surfed, sailed, drove for miles and miles twisting our way along the cliff hugging Hana Highway, ate, drank and explored. We spent a fleeting two days on O'ahu at Waikiki - just so we could say we've been there and now we are home.... 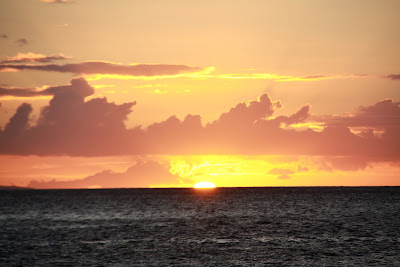 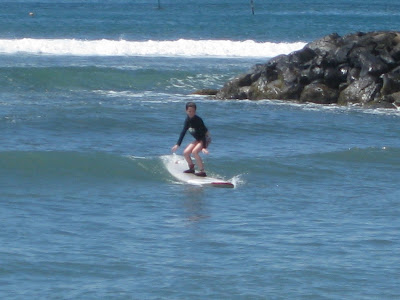 The big girl was a natural on the gentle waves at the Lahaina breakwall - she stood and surfed in her very first wave and absolutley LOVED it. Best birthday present ever she says "thanks Spares" xx 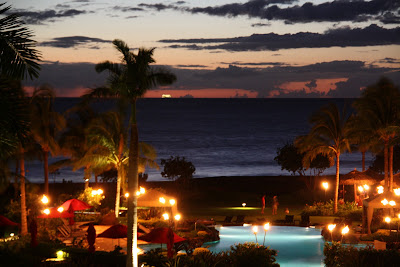 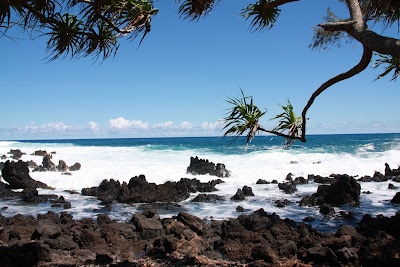 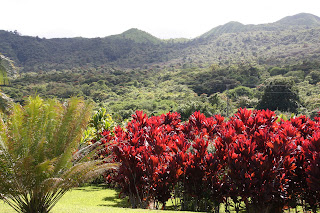 At the end of the Hana highway is the Hana Lava Tube - this is an above ground picture; the soil is so fertile. 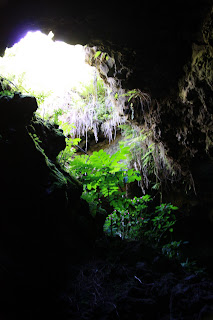 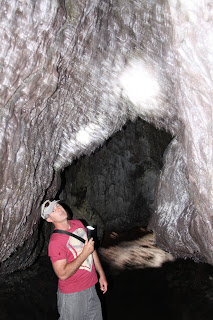 and inside is like molten chocolate (it is also very dark so not a great picture...) lava apparently sets in seconds and the whole tube is formed in minutes rather than over hundreds of thousands of years. 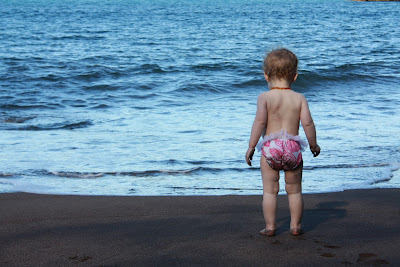 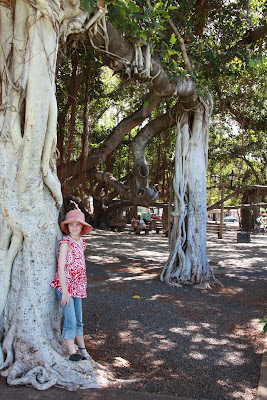 Lahaina's Banyan Tree - here are just two of the 16 major trunks and a few of the scores of horizontal branches reaching across nearly an acre - I just couldn't get a wide enough angle of this magnificant tree to do it justice. 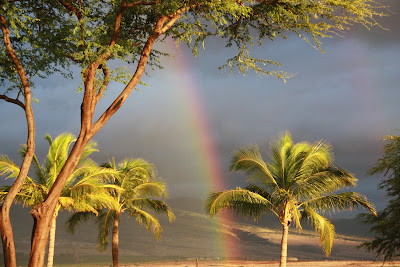 Hawaiian rainbows are as beautiful and almost as common as their sunsets. 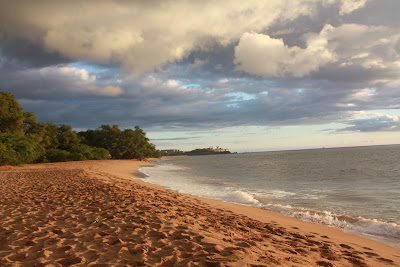 This was 'our' beach 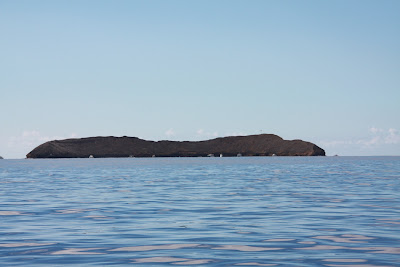 Molokini Crater - this volcanic crater lies midway between the islands of Maui and Kaho'ollawe. Half of the crater rim has eroded away, leaving a crescent shape that rises 160ft above the surface. We sailed a boat out the the crater to snorkle amongst the abundant tropical fish (and loads of other snorklers!). Was a great way to spend my beloved's 41st birthday. 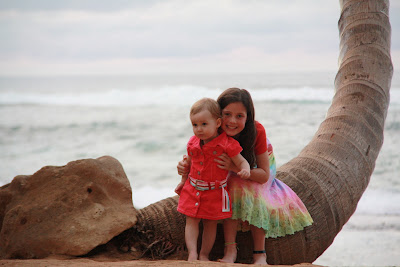 Just has to sneak in a picture of my girls; I took this just on sunset at Mamma's Fish House not far from Pa'ia. We had the most glorious meal and just like our guide book said the island caught fish is so fresh your server tells you not only who caught it, but where! and the dessert, oh my! 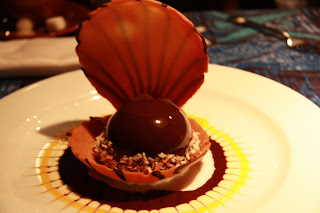 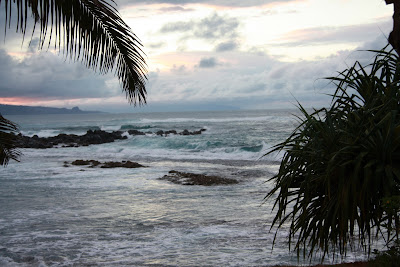 the view from Mamma's Fish House 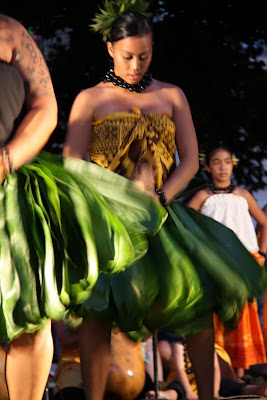 ...the Hula; our big girl waited a whole week to see the Island women dance and she was not disappointed. We watched an hour long, free performance at Kuhio beach, Waikiki. The evening started just after sunset with traditional torch lighting and conch shell blowing and then we were mesmerised by the dancing. There are two styles of hula, one older than the other. Kahiko is the ancient one performed to the sounds of drums and chanting, the modern 'Auana is danced to guitars, ukulele and singing. 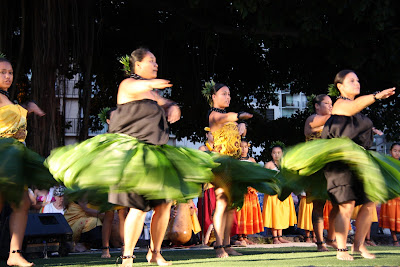 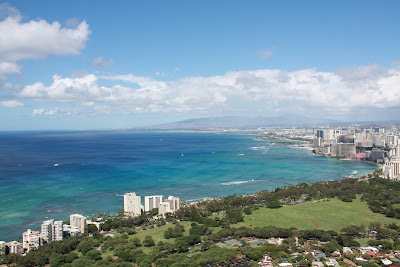 The view from the top of the rim at Diamond Head Crater. Diamond Head is O'ahu's best known landmark. It's a tuff cone and crater formed by a violent steam explosion long after most of the island's other vocanic activity had stopped. In the early 1900s the US army began building Forth Ruger at the edge of the crater, they constructed a network of tunnels and topped the rim with cannons, bunkers and observation posts (the cannons have never been fired). The walk to the top of the crater is nearly a mile - vertical! worth it tho, as was the shaved ice at the bottom - that little van must do a roaring trade! 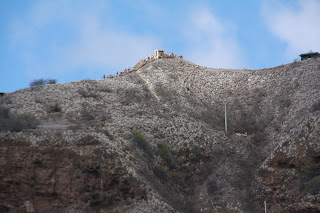 The path we climbed up Diamond Head Crater. 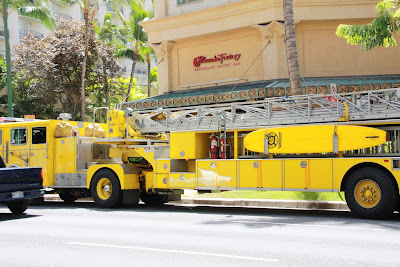 This cracked me up - Honolulu's fire brigade carry surfboards on their trucks.
Posted by S at 8:54 PM

Hello dear Friend!
How wonderful to see all these amazing photos! What an fantastic holiday... truly beautiful:)
xo
Linda

My dial-up connection won't let me see most of your photos, but the adventure sounds spectacular! Welcome back home :-)

Wow, Wow, wow, that looks like an awesome trip! That rainbow looks so close and the beach looks deserted!

Marvellous choice of pictures from your 450! Doesn't you big girl look professional on her surf board?
themother

Gorgeous. Have never had even an inkling of desire to visit Hawaii - but you just changed that. XX

Wow! Shannon, this is beautiful! I had no idea! Absolutely Awesome Blog!! XOXOXOOX, Ang