Craft group is back for term 3...and sharing the best black felt tip of the decade!

We are in a mad five week dash to make as much as we can for the school festival in August; so for the next few weeks we have planned relatively simple projects in the hope that people will make one for themselves and one (or two or three..) for the school. 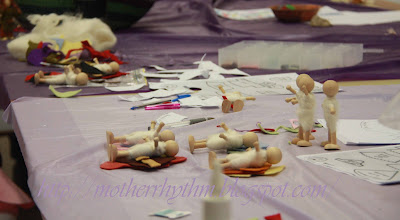 This week we suited up 10cm wood and wire dolls. After cutting out about 15 outfits I made a ladybird fairy. I have the makings of a pirate in my buldging bag of things to do... 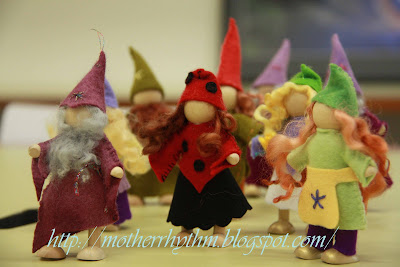 Black felt...it is such a pain to use with patterns because you just can't see where you are cutting. I have used chalk but you can really get a nice thin tipped chalk and I have used red ball point pen with some success if you can catch it in the right light BUT today Sarah, whom I am going to hereafter refer to as Pollyanna, said with a sparkling grin "you need a bit of bling" "I need what?"..."glitter, you need a glitter pen...it leaves a little snail trail of glitter as you trace" I used one (Pollyanna had one handy) and my friends, it does indeed leave a little snail trail. Yay! 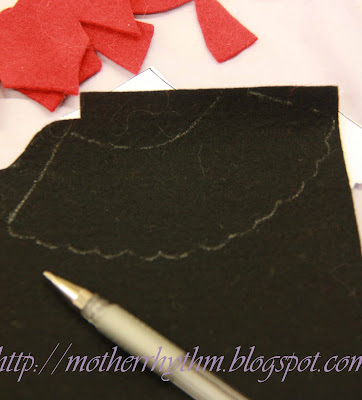 These are beautiful Shannon! My favourite is the pixie girl with purple duds ;-)

Ha! the duds really make her a standout! Now I know why you and Pollyanna were whispering and grinning...she spilled the beans and told you where I was hiding out in blogland.
I can do little jobs but do you need it done in the next five weeks?

How adorable they are!

I have been avoiding black felt ~ but no longer!
Pirates and ladybirds: fantastic ideas!
Snail trail pens ~ well, that's inspired.
Thank you Shannon AND Pollyanna...

PS - I'm living on the Sunshine Coast and am very happy to have discovered your beautiful blog via Natural Suburbia. I thought I'd say Hello!
Aleta ღ

my goodness you take a good photo! :-)

Pleased to meet you Aleta. Pop back next week and have your glitter pen handy!