ANZAC Day – 25 April - marks the anniversary of the first major military action fought by Australian and New Zealand forces during the First World War -the landing on Gallipoli in 1915.

It is the day we remember all Australians who served and died in all wars, conflicts, and peacekeeping operations. On ANZAC day, ceremonies are held in towns and cities across the nation to acknowledge the service of our veterans.

We didn't get up early and go to the dawn service but I made some ANZAC biscuits - The original army biscuit, also known as an ANZAC wafer or ANZAC tile, is essentially a long shelf-life, hard tack biscuit, eaten as a substitute for bread. Unlike bread, though, the biscuits are very, very hard. See here for the original(ish) recipe

I will share my sister's recipe with you - hers is so much sweeter (and yummier) than the one you will find on the War memorial site. She has posted it on the web before so it is already floating around here in the intertubes somewhere - there must be thousands of tweeks from the original recipe, here is just one:

You need about a cup each of rolled oats (porridge oats), plain flour, caster sugar (though she uses a mix of caster and brown) and shredded coconut. Also about 125g butter (4.4 ounce) 2 tablespoons of treacle or golden syrup (I use more - fabulous sticky stuff and oh so sweet) and 1.5 teaspoons of bicarbonate of soda.

Mix all the dry stuff, except the bicarb, in a bowl. Melt the butter and treacle/golden syrup together in a small saucepan and then add the bicarb. "It will bubble like a creature from the golden-brown lagoon, very exciting". Quickly pour this over the dry ingredients and mix like crazy until incorporated.


Roll into balls (using your hands) dessertspoon-fulls of the mixture. Pop them on a baking tray lined with baking paper. Pop them in the oven. You don't need to press them down (but i always do anyway!), they spread out by themselves - quite a bit so don't put too many on a tray or you will end up with one big biscuit! Each tray takes about 15-20 minutes. 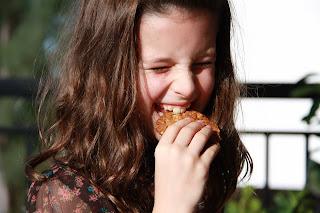 Proudly they march
beside their mates -
slouch hats and jaunty caps
cast shadows on lined faces,
medals glinting in the April sun -
What dreadful secrets
lie behind those eyes
as they remember friends
whose bodies lie in foreign lands
so we might live in freedom -
For those who never knew
the joy of youth,
what pain and gulit and glory
do their cheerful smiles desguise?
...and when they see their country
poisoned by corruption, lies and greed,
and young cowards free to steal and vandalise,
free to spoil and desecrate and maim,
do they wonder as they march,
if their youth and peace of mind and mates
were sacrificed
in vain...

Big Daddy made ANZAC biscuits with the kids this year too, or "ans-day" biscuits as Lily likes to call them. We dragged the kids dressing gowns and beanies in to the dawn service (they were gorgeously behaved, so proud of them!) and I wandered off to work right after.

PS See how spaced out my comment times are? I'm slowly catching up with friends one study break at a time...